Norm Geras died yesterday morning. He’d been ill for some time, and earlier this year when I asked Adèle how he was, her reply wasn’t the one I’d hoped for. So I knew what to expect, but you still feel sad when it happens.

He was such a widely respected man, and I was extremely flattered when asked to contribute to his Normblog profile early on in my blogging career. That someone like Norm would consider me “grown-up” enough to contribute felt astounding.

I didn’t read his blog every day, but as his facebook friend I caught most of his daily comments about “everything”. When I acquired a new fb friend some years ago, the thing that really impressed her was that I was friends with Norman Geras!

The first thing I ever heard about Norm was about his room, filled with books on cricket. He had a lot, though I understand he actually parted with some of his collection before he and Adèle moved from Manchester three years ago. I admire him for that, now that I am facing a cull in my collection of not-cricket books. 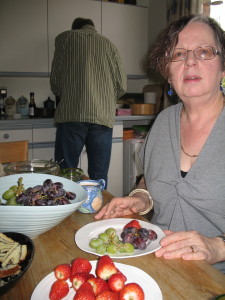 We met when Daughter and I came to their house to interview Adèle four years ago. Not wanting to eat with us girls—or perhaps not being allowed to—his salad was brought to his office, but he came down for cake and strawberries later.

Norm kept blogging and generally staying in touch with the online world until last week. I kept checking, always hoping he’d be there.

(People have been collecting tributes and links on this new blog.)